Our "Un-hesive" is a really amazing patented marine formula for those of us who have struggled with the impossible task of removing structural type polyurethane adhesives like 3M 5200 Marine Adhesive.  It can also de-bond other types of polyurethane adhesives, expanding foams, Gorilla Glue, and marine polysulfide caulks like Sika-flex.

Be sure to take a look at the customer reviews for this product below. This product does exactly what it says, and beats all other products at removing 5200.

While the cautions on the label on a tube of 5200  will tell you that it makes a permanent bond, which can only be removed mechanically, this amazing marine formula adhesive remover will actually de-bond the 5200 adhesive by breaking the grip between the 5200 and the surface to which it has been applied.  It just breaks the bond, but does not break down the adhesive material itself, so it can simply be peeled away without damaging the surface, or requiring hours with a chisel and scraper.

This water-based solution, looks, feels, and smells like a mild kitchen cleaner but delivers impressive results. We know by experience that other so-called de-bonding agents (that come in a tiny 1 oz bottle) just don't perform. They are slimy, smelly, turn the adhesives into a gooey mess, and don't allow the adhesive to be peeled away.

This "Unhesive" will also remove other polyurethane and polysulfide sealants, expanding foam sealants, some glue residues, and even window tint films. We even use it here at the office to easily remove stubborn dry-erase marker scribbles from our whiteboards (we haven't found anything that works better).

So does it really work?  It does! Some jobs are tougher than others, but the only ingredient missing in the bottle is the 20 minutes-worth of patience that is needed for the formula to seep between the joint to work its magic.  It debonds as it goes, so, it may take some time to seep between the bond.  if you spray it on and then go have lunch, the bond will have begun releasing while you are gone.  If you've done these chores the old-fashioned way, you will really appreciate having a bottle of this on-board, or in the garage.  The formula must stay wet on the bond to do its magic.  We recommend finding some shade, or covering with saran wrap if attempting on a hot day in full sun.

How is it different than Anti-Bond 2015™ or De-Bond Marine Formula™?

1). Rather than soften and break down the 5200 and turn it into gooey mess, the Un-hesive formula simply breaks the bond between 5200 and the substrate, be it wood, fiberglass or other material, which normally allows the 5200 to just peel-away.

2). Un-hesive is a mild, fragrant, and water-based formula, rather than a stinky, slick, and oily petroleum-based product.

3). Because it is water-based, and doesn't leave behind a gooey and oily mess, rebonding (i.e. getting other sealants to stick again) is easy.  With the competitive products rebonding materials to the same area again is difficult, if not impossible.

4).  You get a full 8-ounce environmentally-friendly pump bottle of Un-Hesive for less than their tiny 1.2 ounce or 4 ounce aerosol spray. 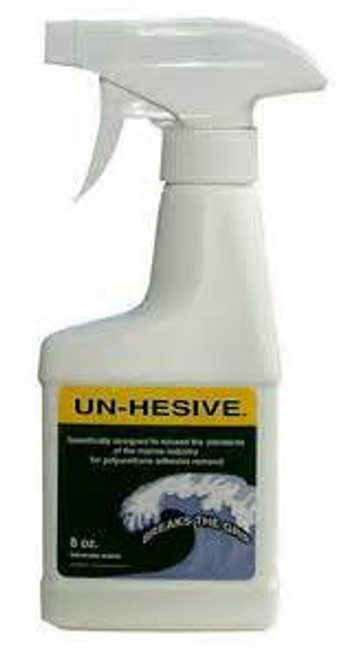