The lumen is one of the most misunderstood and most misquoted values used in describing light output. A lumen is simply a measure of total visible light energy (luminous-flux) produced by a light source, and as such, it does not consider the area over which it might be spread. Said another way, it is a measurement of the energy emitted by the bulb that the eye can actually see. So, it is very similar to a watt. Like a watt, it is also independent of distance. A 100 lumen bulb is a 100 lumen bulb at ten feet or ten miles.

You don’t measure lumens with a simple light meter. If you are using a lightmeter you are measuring illuminance, but not lumens. The typical light meter is measuring foot-candles, or their metric equivalent, lux, both of which are a measure of lumen-density, (i.e. luminous flux falling on a given area) but not lumens. Two bulbs with the same number of lumens can have very different illuminance readings. A bulb with a narrow beam focus will measure much higher lux in the center of the beam than its wider-angle counterpart. This is because lux is a measurement of just lumen density, but not total lumens.

To measure lumens, one needs either an integrating sphere, or a goniophotometer, something most folks don’t have lying around. Fortunately, here at Marinebeam, we have an on-site goniophotometer. It

measures luminous intensity by angle, which is then mathematically cosine corrected, and integrated to calculate the bulb's total luminous-flux in lumens.

WHY YOU SHOULDN'T TRUST MOST LUMEN CLAIMS

Most of our competitors just take the theoretical maximum output from the LED supplier's spec sheet (for the LED chip), and multiply it by the number of LEDs in their cluster to arrive at a lumen value. Unfortunately, it just doesn't work that way. The result from one of our most-famous competitors is a misstatement of lumen values of more than 70%! This is the same competitor who claims "rated highest lumen value by Practical Sailor", when Practical Sailor didn't test for lumens, and the article clearly states lumen values were provided by the manufacturers. Another competitor has a lens on each of its products which focus the light into a narrow spot, so they measure candela (intensity), and then make wild claims like 60 watt “equivalency”.

The FTC is finally cracking down on the charlatans, and have announced here a lawsuit against one of the biggest offenders for claiming ridiculous lumen values.

Because incandescent bulbs are isotropic (omni-directional), and rely upon the fixture and its reflector to re-direct the light, much of the light never reaches the intended surface. Fixtures used in boats typically are poorly designed optically, have very inefficient reflectors, and cheap lensing. Given this fact, and the fact that at least 50% of the isotropic bulb's light is shining in the wrong direction to begin with, one can see that incandescents waste much of their available light.

One of the huge advantages of LEDs is that they are directional light sources. This means that we can start with all the light heading the direction we want it to go. With LEDs as a light source very little light is wasted.

Total Effective Lumen values for isotropic incandescent bulbs are not only influenced by the reflector and fixture design, but they can also be influenced by dirt, corrosion, and luminous degradation of the bulb itself, from a build-up of tungsten coating the inside of the bulb. LEDs are mostly immune to these issues, because they don't rely on the fixture design and construction to direct the light effectively. However, some factors like fixture lensing, dust, ageing, and material defects can influence the lumen effectivity of both incandescents and LEDs.

With LED replacements in your existing fixtures, it is typical to see up to 95% of the light energy hit the intended surface. With incandescents, a good fixture with a pristine reflector and new bulb could be as high as 70%, but 35% is not uncommon depending on reflector quality and design. 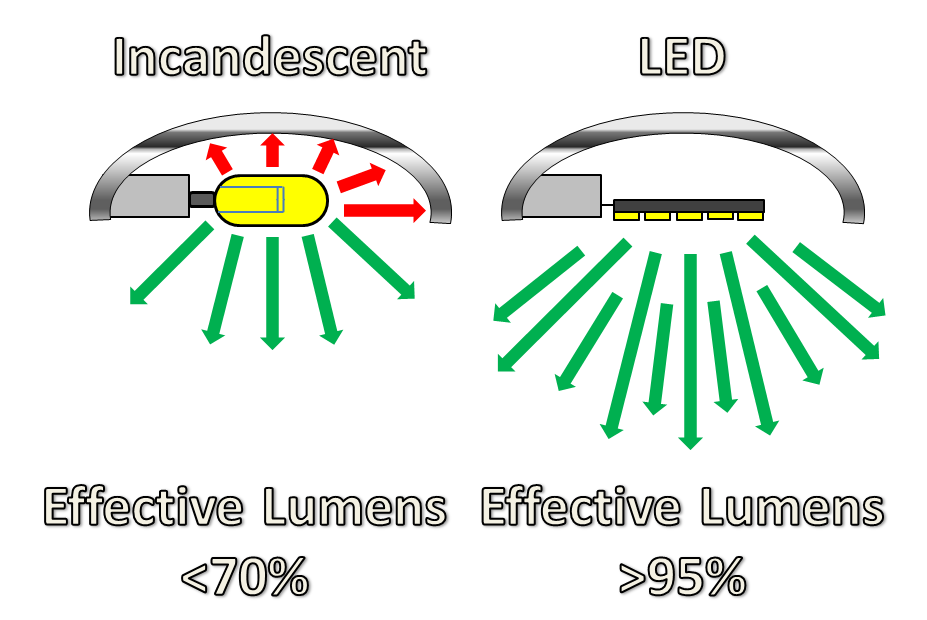 So, we can see that in the typical marine fixture that the Marinebeam products match up well against their halogen counterparts, and with our high-output multi-emitter products one can expect a big improvement over their existing 10W or 20W halogen or xenon bulbs.

Both incandescent and LED's suffer from lumen depreciation. This is the phenomenon where, over time, the luminous output of the bulb is reduced.

Incandescent lumen output degrades relatively steeply as the filament begins to erode and tungsten and other materials off-gas and deposit themselves onto the glass globe. Incandescents typically end their useful lives in catastrophic failure after mere hundreds of hours of use.

LED's also suffer from lumen depreciation. Most LED's luminous output is recorded after some period of "warm up" were the LED's are allowed to stabilize, as the initial output from LED's can vary dramatically as they come up to temperature. It is not uncommon for LED output to depreciate 5-10% in the first 1,000 hours. Good thermal management practices can reduce this depreciation to the low end of this figure. Of course, at 1,000 hours the halogen is likely already dead, or has certainly depreciated more than 10%.

LED lifespans can actually be 100,000 hours or more, but they are typically rated to 70% of their initial lumen output. In other words, if the LED bulb has an L70 rating for 50,000 hours, that means that at 50,000 hours the output of the bulb has depreciated at least 30%. This threshold was chosen by the industry because the human eye has difficulty perceiving any drops of less than 30%. Be very wary of claims for high-output products of 50,000 hours or more, as they are likely not made considering the L70 standards.

Many people mention "efficiency" of LED lights when discussing their output per Watt. The correct term is "efficacy" because we are dealing with power in (Watts) vs. Luminous Flux out (Lumens). Because Watts and Lumens are different measures, we use the term efficacy. If we were comparing power in to power out (Watts to Watts) we would use efficiency.

In any case, the higher the efficacy the more light we are getting for the energy we are using. High-efficacy light sources, like LEDs, are a perfect solution for us boaters. The higher the efficacy the better the payback. The efficacy of LEDs is improving all the time, with laboratories recently announcing efficacies of 150 lumens/watt, or more, for white LEDs. Remember though, this is only happening in the lab at present, and the numbers refer only to the emitters themselves. Once they are packaged into a commercial product the efficacies can be much less. Here at Marinebeam we are just now reaching 90 Lumens/Watt for replacement LED clusters in a Warm White color, and this is currently the benchmark for the industry. Cool White LEDs have a higher efficacy than Warm White LEDs, because the Warm White LEDs use more phosphors, which absorb and re-emit the light in a warmer wavelength.

Efficacies of various light-sources are shown below:

The best way to understand why LEDs give off less heat than their incandescent counterparts is to understand that LEDs make more lumens per watt (are more efficacious), and therefore need less energy in watts to generate the equivalent amount of light.

Remember also that all the energy that goes into a light bulb eventually turns to heat. Get into a small elevator with six overhead halogens, and you will quickly understand this effect. A boat with ten halogen 10W lamps is heating up the boat by about 340 BTU per hour. It is sort of the same principle as an easy-bake oven. So, if you want your boat to be much cooler at night, while saving a ton of energy, then you should consider converting to LEDs.

The chart below shows the percentage of visible vs non-visible energy emitted by a halogen vs. an LED light. 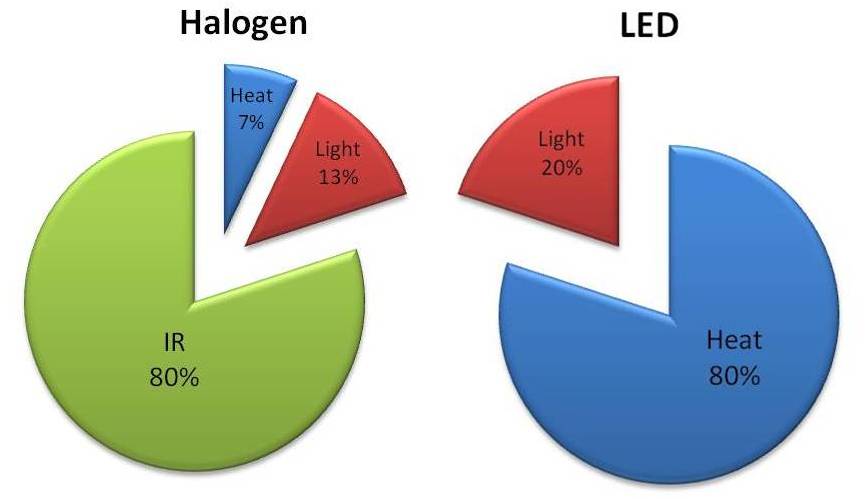